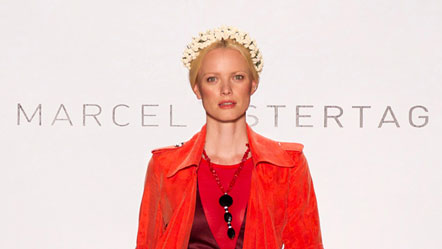 Marcel wants his creations to instil self-confidence in women. The young designer from Munich loves to demonstrate that he has more than enough of it himself such as when he made an appearance at his own show, walking down the runway as a model in high heels.

Marcel Ostertag is what we would call a "self-made" man. As the creative brains and the face of his label with the same name, the 33-year-old is action man and brand in one and is one of the most up and coming young designers in Germany. Even though, technically speaking, Marcel Ostertag is no longer one of the very young labels. Since his launch in 2006, he has regularly presented his collection at the Mercedes-Benz Fashion Week in Berlin - and with great success. City dwellers in particular, love the urban side of the designs that convey a sense of high fashion without any sort of romantic influence. This young and established designer can be found in Munich. That's where he lives, works and finds his inspiration. His goal is to bring out the beauty and confidence in women through his creations. He always stays true to himself.

Prior to his rapid rise in the world of fashion, Ostertag pursued another big passion for many years that also involved the stage: ballet dancing. However, due to a knee surgery, his big dream never became a reality. After spending several years trying to find his passion, he began studying fashion at the renowned St. Martins College in London, which brought a sense of passion and discipline back into his life. The talented designer completed his Bachelor and then his Masters degree with First Class honours, and showed his work at the "Lancome Colour Award", at the Victoria and Albert Museum in London and at Beijing Fashion Week.
With his "Masters Degree" in the bag and extensive fashion know-how - he had already worked on projects for Paul Smith, Burberry and Dunhill while studying - Ostertag returned to Germany. He financed his first collection with a loan. His win of the "Karstadt New Generation Award" in 2008 brought him publicity, his own design line developed specifically for Karstadt and 60,000 euros in prize money. This was the foundation for the following years and for Ostertag's first show at the Mercedes-Benz Fashion Week in Berlin 2009.
The fashion experts at Miele also took notice of the young star and began a promising collaboration. In 2012 Ostertag presented his collection exclusively for the third time at the IFA trade show in the context of the "Miele Fashion Days". Two years before that, he attracted attention with a gorgeous design for the "Miele dress", a glamorous red carpet gown and the yearly highlight of the IFA fashion show.

Nonetheless, Marcel Ostertag stayed true to his love for ballet. Many of his creations contain a special lightness that is reminiscent of ballet dancers on stage. Flowing fabrics, lots of chiffon, clear lines and elaborate details characterize the feminine designs, inspired in part by the Seventies and Eighties. Added to this is a creative material blend of high-tech fabrics and natural fibres as could be seen in the successful autumn/winter collection for 2012: exquisite patterned costumes in green and brown earthy tones were shimmering with shiny lurex and brocade.
For the spring/summer collection 2013 Ostertag, who by the way has all his designs made in Germany, among other things created highly wearable red gowns from shiny silk fabrics, with high necks and elaborate cut-outs at the shoulders.
The biggest surprise, however, came from the trendsetter himself. He opened the show in a red dress, high heels, a full beard, wearing blush and a flower wreath on top of his bun to the applause of the present fashion community. Hats off!